What does the Insurance landscape look like in Iran? What is the current situation? That is what we are going to read about in this article. This first article provides a general picture of the insurance industry in Iran. I will provide a map of Insurtechs in the next article and more detailed information on the ecosystem, it’s opportunities and challenges.

I might first start by an 85-year journey in time when the first insurance company was established in Iran in 1935: Iran insurance company. A government owned company until 1971 when we see the first regulatory body, which was too, a governmental institution: Central Insurance of Iran. Until 2004 all the insurance industry including some 4,5 companies were governmental until the parliament ratified the execution of Article 44 of the Constitution which allowed the private sector to enter the banking and insurance industry.

Following the ratification, private insurance and banks started to branch out. In fact, it was a turning point in Ownership not a change in processes of donning the business in this sector. To be honest, there were some innovation around products but not the business model.

That is, until now. The Insurtechs have brought a new business paradigm and they are putting pressure on the industry, i.e., insurance companies to play by the new rules. As new entrants to the marketplace, Insurtech started to branch around 2016-2017. Like other parts of the world, they were at first the brothe-in-law to Fintechs but have steadily started to build their own identity. This is our point of the article. What was and is the Insurtech playground in Iran.

First, I might give some information on Iran itself: a country of 82 million residents, with 50% of them under 30 years of old. Another fact is that Iran has an insurance penetration rate of 2.38% compared to 6.1% of the world but still has the third seat in the middle east and central Asia.

Another supportive fact is that almost 12 million people are application developers in Iran! It is a significant number for the developing Insurtech ecosystem, but the problem is that most of them lack one of the KPI’s for success of business and is not familiar with the insurance industry. This information can give us a picture of what Insurtech might face in a market like this.

However, there are other problems. I start by classic sales network, which just allows three channels to conduct business in insurance industry.

Insurtech are not allowed in the game. If there are some rumors by Central insurance of Iran that it has been part of their agenda to give the Insurtech a seat in the sales channel, so that they too could issue the policies and benefit from the sales commissions. The challenges exist between old-fashioned insurance companies and regulatory bodies (even if all of them except one have been private or privatized).

The insurance companies lack the most important factors to help enable collaboration with Insurtechs:

1- Culture matters: insurance companies in Iran are a bit like the dinosaur; they are big but move and react to change very slow. They have a work force that goes back at least to 2004 and they are not familiar with new insurance paradigms, new business models, Insurtech itself and it’s effect on industry so they resist the innovations even if their CEO asks them to cooperate with an Insurtech. They still see the policyholder as customers, while in the context of digital transformation in socio-cultural behavior, the customer is evolving to a user with a desktop or smartphone – an exciting and critical evolution.

2- Capital: fund raising is a matter of concern for Insurtechs, especially when the insurance companies’ doors are closed. The private sector is lean and is dealing with the problems of sanctions too, so funding becomes an Everest to climb! Even the incumbent and accelerators which have slowly appeared, have capital shortage and they too have used the work force of the insurance company and most of them have the same view toward Insurtechs; a harsh look.

3- Regulations: the Dr. Frankenstein of the industry. I mean it. There is no single road to ride! There are plenty of public and governmental organizations that have a voice in this game. You cannot catch up with every
one of them. There are several contradicting and old laws and you as a young and agile Insurtech startup do not know what to focus on. It is a fractured legal environment.

4- Business model: insurance companies in Iran, though mostly private, still have to hold tight to the old business models, making it harder for Insurtechs to enter a win-win and scalable partnership with these companies. There have been some small changes in the companies’ view toward new business models but it is not enough to help the Insurtech ecosystem.

5- Immature ecosystem: all the above-mentioned challenges greatly impact the Insurtech ecosystem – and that is the immature growth of Insurtech categories. For example, a lack of a Comprehensive data law, like the one that exists in the EU, GDPR.

Most of the data-based categories of ecosystems include:

Difficulty around developing business plans exist. Keep in mind that there are rarely full-stack Insurtechs in Iran, most of which, are the price comparison platforms and other categories, who are fighting for the removal of the above-mentioned barriers.

You can see the insurance industry in Figure 1. 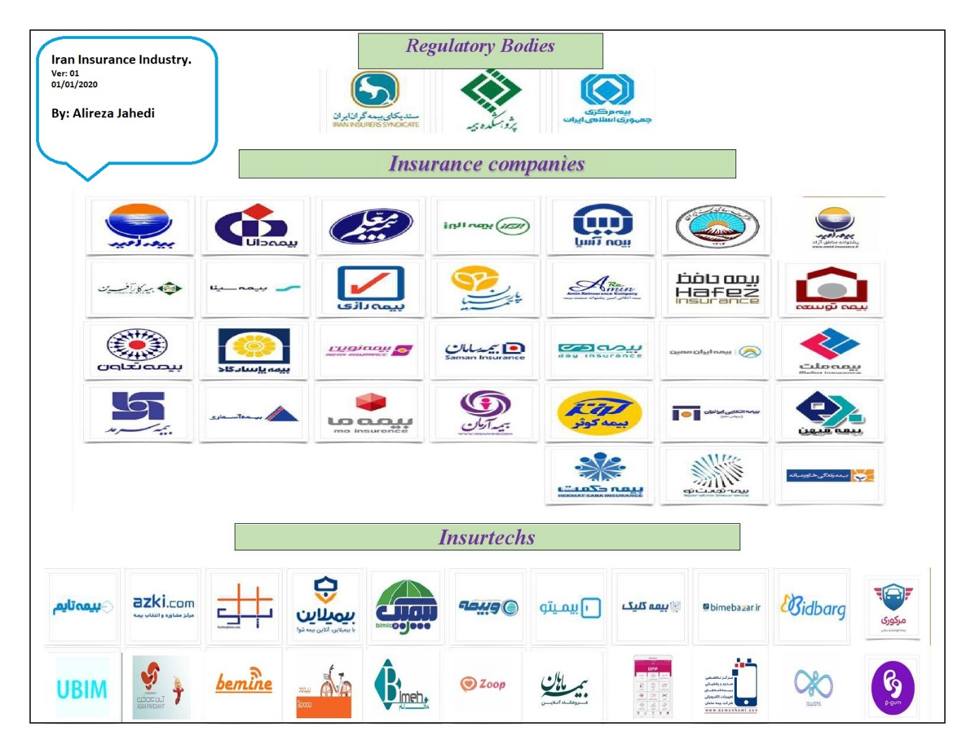 And in the Insurtech ecosystem there are numerous numbers. Due to different organizations which provide the related statistics on the Insurtechs I will try my best to map a more detailed picture of active Insurtechs with more reliable data within my next follow-up article. Thank you for reading! [1]

[1] This article is the personal view of the writer.